Warning: "continue" targeting switch is equivalent to "break". Did you mean to use "continue 2"? in /home/www/wordalivepublishers.com/site/wp-content/plugins/jetpack/_inc/lib/class.media-summary.php on line 87
 Back to Mudslinging Politics?

Back to Mudslinging Politics? 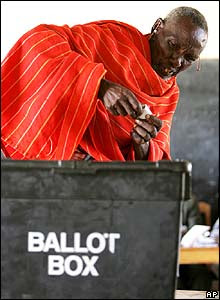 For Kenyans, the March 2013 General Election will be a historical event. Under one of the world’s progressive constitution, we have hope that the new elected leaders will push the Vision 2030 agenda.

With the campaign fever already on, and politicians on the trail trying to win our hearts, and our votes, the fear of a replay of the 2007/8 post election violence hangs over the country like a dark nimbus.

One mechanism put in place to prevent such reccurence is the monitoring of hate speech. Is it working? That’s a story for another day. The one thing that hasn’t changed is the politicians’ habit of taking cheap shots at each other: trading insults and hardly darticulating their policies, or discussing issues of national importance.

Are these the kind of leaders we want for our country? We have voted for them time and time again, and our country’s social fabric, and economic growth have suffered due to this narrow approach to leadership.

We need the giants, so described in Fred Geke’s Best Foot Forward.

He writes to know a true giant, just observe two things: How does he treat his enemies? Secondly, how does he treat his friends? Real giants don’t kick a person who is already down. No true champion takes on an enemy who’s not at his or her best.  David fought Goliath, both were at the top of their game.

What is the mark of a good leader? According to Fred, they take initiative, a sense of purpose, do not use their position to intimidate and demoralise others, hand the initiative to the team, have a mentor, and happy to delegate.

“True giants don’t rub it in. They assist and release. True giants raise up another, but don’t proceed to make a protégé into a slave or a pet. They release others to walk in their new found value.”

Even as we follow the politicians’ campaign, lets elect the true giants on March 2013.