Kisii County, encircled by undulating lush green hills 309 Km south-west of Nairobi, is the home of bananas and soap stone. It is one of Kenya’s most densely populated Counties. The warm and welcoming people of Kisii Town, the bustling capital, played host to the region’s first ever book fair from 12 – 15 June, 2012.

WordAlive was in this vibrant town to showcase its range of products. Joining other members of the Kenya Publishers Association (KPA), WordAlive’s goal was to inspire children and adults to read, encourage booksellers, and spur the book trade in a County known to have a poor reading culture.

The Fair was organised as an intervention to take books to the County that had some of the worst performing schools (nationwide!) in the 2011 Kenya Certificate of Primary Education exams. Hence, WordAlive donated books worth Kes225,000 (US $2,750) for the children’s activities and libraries of some of the participating schools. 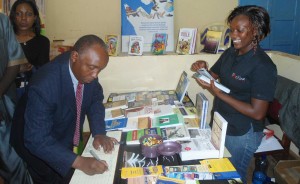 By participating in such regional book fairs, WordAlive hopes Kenyans will “come alive with books,” and that reading for leisure and self-actualization will become norm in every home.

Kenyans are generally accused of having a poor reading culture. Explanations for this are varied, but the common arguments are socio-economic, placing little value on search for knowledge, the oral orientation of African cultures, and, some even claim downright laziness!

“This is the best thing that has happened to the book industry in Kisii,” declared Josephine Onamwa, Chairperson of the Kenya Booksellers Association, Kisii County Chapter, and also Managing Director of Jonasavicke Bookshop. “Please, make the Kisii Book Fair an annual event!” She beseeched the KPA. 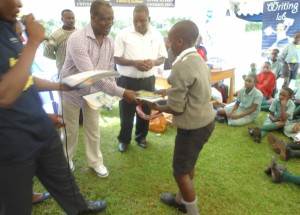 This year’s theme, “Education and Peace,” was most fitting in light of the General Election slated for March 2013. The exhibiting publishers thus doubled up as peace ambassadors.