Finding Your One Thing 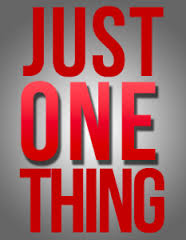 There is an unforgettable scene in the 1991 American comedy film, City Sleekers, that I love, except for the vulgar four-letter word. It is the conversation between cowhand Curly, played by Jack Palance, and Mitch (played by Billy Crystal) who is in mid-life crisis. The conversation goes:

Curly: Do you know what the secret of life is? [Holds up one finger]

Curly: One thing. Just one thing. You stick to that and the rest don’t mean [bleep].

Curly: [Smiles] That’s what you’ve got to figure out.

To focus on the one thing, we must learn to say “No” to our distractions – the many, often good, things that stand in the way of our success. Staying clear of distractions helps us concentrate on the one thing that has the potential to deliver remarkable results in our lives.

What is your “one thing?” The one thing that you do best? The one thing that makes you want to jump out of bed in the morning and forget to take a lunch break? Playing to that one strength could be the difference between your life now and the life you were meant to live – a life of purpose and destiny.

And if you don’t know what your “one thing” is, then you’ve got to figure it out.

Attitude Down But Not Out