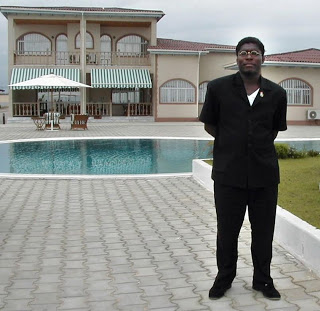 Teodorin Obiang, the second VP of Equatorial Guinea and son to the President, owns this beachfront mansion in his country’s town of Bata.
Image from foreignpolicy.com

In the small and oil rich West African nation of Equatorial Guinea, Teodorin Obiang – the 42-year old son of the country’s president who serves as the second vice president having also been minister for forestry and agriculture for many years – lives the high life. He is reported to own luxury homes in Cape Town (South Africa), Malibu (US), Buenos Aires (Argentina), London (UK) and Paris (France). He is also said to own a private jet; a car collection that includes two Bentleys and a Lamborghini; and a yacht he purchased for $380 million – 3 times his country’s health and education budget. Yet, 70 per cent of the people he is meant to “serve” live below the poverty line

In his book So Many Leaders, So Little Leadership, Dr. John Stanko writes that many leaders succumb to the temptation of using position and raw power to pursue selfish personal agenda like amassing wealth. Such leaders intimidate and manipulate their followers to get what they want.

Sadly, the first agenda for the newly elected Kenyan leaders even before they were sworn in was to agitate for their “reduced” perks to be drastically increased as “deserves” their status, though they’re still among the highest paid in the world. The argument that Kenya’s public wage bill is unsustainable at 12 per cent of GDP (compared with 6.5 per cent for the other Africa countries and 5 per cent for the East Asian Tigers), and that the leaders should first grow the economy before they can negotiate for higher perks, won’t just wash. Their argument is that they should first be paid what they “deserve” so as to get motivated to “serve” the people and grow the economy – probably the same reverse thinking Teodorin Obiang uses to acquire more and more wealth as a “servant” of the people.

Leadership in Kenya is synonymous with “perks” – it is hardly about serving – yet we’ve doubled the number of MPs in the national assembly, not to mention the many more representatives in the County assemblies! So Many Leaders, So Little Leadership focuses on the leadership paradox – how to develop a servant leader’s philosophy in a power hungry world. The author draws upon the leadership styles of the biblical Moses, David and Daniel to paint vivid pictures of the price of leadership. He argues that leadership is part preparation, part perspiration, and part inspiration. Simply put, it is hard work.

Elected? Know Who You Are As A Leader Leading From A Biblical Viewpoint