Where There’s A Will 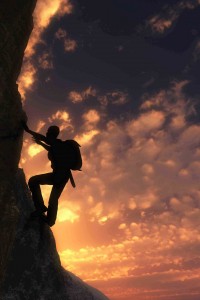 “I shall either find a way, or make one.” –Hannibal

Sylvanus became an orphan at the age of ten. Both parents died within a short period of each other. None of the relatives was able to take care of all the five siblings, so they were separated to live with different family members. Sylvanus got shelter at one of his uncles’ home in Nairobi. But when the uncle served jailed term after a business scandal and his family fell apart, Sylvanus ventured in the streets where he carved out a grim life.

Another Uncle who lived in the Rift Valley rescued Sylvanus from street life and took him back to school. Wanting the young boy to contribute to his cost of living, the uncle also secured a casual job for Sylvanus to work as a tea picker during weekends. Life in his new home was however full of abuse and neglect. Sylvanus was desperate for escape. He figured that the only way to freedom was to get admission in a boarding school, so he worked doubly hard to pass his final primary school exams.

He passed the exams just fine, and was invited to join a respected boys boarding school. As fate would have it, his uncle failed to pay the school fees and Sylvanus dropped out after only one term. Devastated, he sought refuge at his auntie’s home in Western Kenya. He borrowed his auntie money to start a business. She could only afford a paltry Kes100 (US $1.50) which he used to purchase sweets and groundnuts to hawk in a nearby town. The new business earned him a profit of Kes50 (US $0.60) per day.

Sylvanus caught the attention of the proprietor of a local secondary school who offered him a place at his school, and the assurance of full sponsorship. He grabbed the opportunity. He did not disappoint his benefactor as he ended up becoming a top student. He passed well enough to earn a place at the university, but he gave it up when he couldn’t get a bursary, or raise the fees.

Back to hustling, Sylvanus tried his hand in vending newspapers and used clothes, mitumba. Soon, with the help of another relative, he bought a motorbike for passenger service, boda boda, which he operated in Molo, about 200 kilometres from Nairobi. His life seemed to be on a turn but one day, his uninsured boda boda got involved in a freak accident. It was a write off.

Just around then, violence broke out in Molo after the disputed presidential poll in 2007. He had to flee. Back in Nairobi, he sought refuge at yet another uncle’s home in the slums. He got admission on one condition: he would get a free room if he promised to start paying rent after three months. With all his hustling, he couldn’t raise sufficient funds to pay rent after the expiry of the grace period. He got kicked out of the shack.

Homeless, hungry, and angry at life, he pleaded with an acquaintance to rent him a room with a promise not to default. He lived in the room and also conducted tuition classes for the slum kids from there. His earnings of Kes10 per 2-hour tuition could neither pay rent nor meet his other needs. In despair and at crossways with his landlord, he sought for employment. He got a commission sales job with a firm in Westlands. The job involved personal selling in the streets, in offices and homes. He had several run-ins with the City Council askaris for illegal hawking, one time earning him a 2-week jail term. Undeterred, he rose to the position of regional sales manager though soon after, the firm went out of business and Sylvanus was jobless yet again.

With his experience in sales, small savings he had kept aside, and a little bravado, Sylvanus registered a marketing firm and started recruiting jobless high school graduates to sell fast moving consumer goods. Only five years after starting his company, Sylvanus now employs 50 young people. He has opened branches in six towns.

“I don’t want to get back to poverty ever again,” Sylvanus says.

“In the process, I want to help young people learn to be persistent in the pursuit of their dreams,” he adds.

Sylvanus targets to extend distribution nationwide and grow his workforce to 1,000 people in the next two years. “No mountain is too high to climb. With focus and the patience of the tortoise, anyone can achieve their goal. If I am doing it, then anyone can.”

Life’s paths are punctuated with stumbling blocks. What distinguishes winners from laggards, and greatness from mediocrity is the ability to turn their stumbling blocks into steppingstones. Sylvanus’ attitude towards all the stumbling blocks in his path symbolizes the words in Christina Aguilera’s lyrics, “Stronger”:

Against All Odds Part 1 – I Know You Can Do It