Warning: "continue" targeting switch is equivalent to "break". Did you mean to use "continue 2"? in /home/www/wordalivepublishers.com/site/wp-content/plugins/jetpack/_inc/lib/class.media-summary.php on line 87
 You’re Meant to Be

You’re Meant to Be 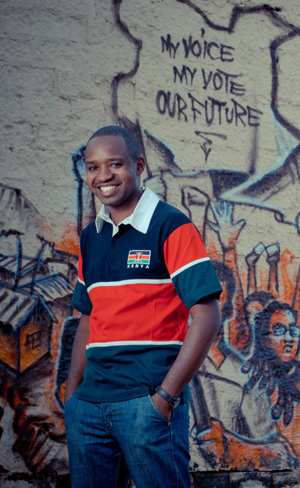 The Departed, a 2006 hit movie, is the story of three men – a crooked cop, a brutal Irish Mafia boss, and a decent cop that goes undercover to expose the two. In the opening scene, the Mafia lord, Frank Costello (played by Jack Nicholson) says, as the images of chaos and violence roll: “I don’t want to be a product of my environment. I want my environment to be a product of me.” How cavalier.

Boniface Mwangi, the award winning Kenyan photojournalist turned activist, is a man on a mission. He is known for speaking against social injustices – especially when perpetuated by the ruling class – and he does it rather loudly.  This cause has become the embodiment of Boniface’s life purpose for which he has been arrested severally.

Recently, Boniface organised a well-publicised protest, “Occupy Parliament,” to oppose Members of Parliament’s bid to have their perks increased. The incident attracted significant coverage in both local and international media for its audacity – live pigs covered in blood were huddled around parliament to epitomize MPs’ greed!

While many people struggle daily trying to figure out what their life’s purpose might be, Boniface has found his. Despite the many obstacles and odds against getting his message across, Boniface soldiers on fighting the good fight. He is a non-conformist who acts on his convictions, notwithstanding. James 1:12 says “Happy is the man who doesn’t give in … for afterward he will get as his reward the crown of life that God has promised those who love Him.”

John Mason’s book, You’re Born An Original, Don’t Die A Copy is an all-out attack against mediocrity. The book puts mediocrity and unfulfilled dreams where they belong—out of your life! The author says that God created each person for a specific, unique purpose, and that He has called you not to blend-in or imitate someone else, but to become all that He wants you to be. The fifty-two nuggets contained in the book have the potential to bust down the barriers to excellence in your life and release you to become all God created you to be. He made you on purpose for a purpose. The world desperately needs the originality that only you can provide.

You’re Born an Original, Don’t Die a Copy provides wisdom for navigating through the discovery of God’s purpose in your life. The book will inspire you to embrace your unique talents, strengths and gifts, and use them with great confidence.

Doing Business By the Book The Mandela Spirit